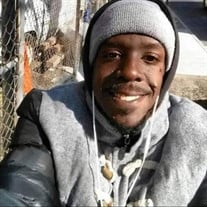 ZAQUAN UNIQUE WEST was born on November 28, 1987, in Brooklyn, N.Y. to Joann West and Rickey Wright. Zaquan, affectionately known as Za, attended Boys & Girls High School, and later transferred to The Door, where he received his High School Diploma. He then went on to pursue a Culinary Arts Degree from Star Career Academy. Za catered many events over the years and loved to whip up all kinds of dishes, his specialty was cheesecake - it was a crowd-pleaser. Zaquan was a proud father and loved his only daughter Danielle unconditionally. He was a soldier, fighting for his life from the very first day he was born into this world. Za never let his disability hold him back from anything he wanted to do. One of his favorite songs was “Don’t Look Down on a Man” and that’s exactly what he lived by. With some days being tougher than others, he fought, with very little complaining, and he continued to live. His strength to live life to the fullest, never giving up, made him the “Ultimate Warrior.” Za had a special love for children; he was so excited to be an uncle to his niece Paige, whom he loved very much. They shared a very special bond, and there wasn't anything he wouldn't do for her. Za was a person you could count on, he was a loyal and devoted friend to many, especially to the ones he called his brothers for life “BFL” Marlon “Sauce” Batiz; Darryl “Rell” Rembert; Michael “Haze” Brown and his brother/friend Wayne Heyward - they were all thick as thieves. Za transitioned to his Heavenly home on June 5, 2020 at Sloan Kettering Memorial Hospital, at the young age of 32 years old. Son, brother, uncle, cousin, grandson, friend, nephew, we love you, the battle is over, now go on and accept your beautiful Heavenly Wings until we meet again. Zaquan leaves to mourn and cherish, his only child 8-month old Danielle, whom he affectionately called “Coco”, his mother, Joann West; father, Rickey Wright; three siblings, Shaquanna West of Sayreville, NJ; Ta-Liese Wright, and Marquise Wright of New York, NY; step-sisters Donna Stewart McNeil, of Rockville Centre, NY; and Desirae Best of Danbury, CT; step-brothers: David Best; Kihliefa Best; and Robert Best, of Danbury, CT; one niece, Paige Harrison of Sayreville, NJ; grandmother, Barbara West; Godmother, Judy Samuels; aunts, Izora “Mae” West; Beverly Middleton; and Ebonie West, all of Brooklyn, NY; Eunice Thomas, of Quaker City, OH; Dawn Glasco; and Nancy Glasco, of Cleveland, OH; Marlene Davis, of Euclid, OH; uncles, Maurice “Skip” West of Brooklyn, NY, Rickey “Unique” West of Bronx, NY; and Charles Wright of Cleveland, OH; and a host of great-aunts; great-uncles; cousins and many, many friends.

The family of Zaquan Unique West created this Life Tributes page to make it easy to share your memories.

Send flowers to the West family.