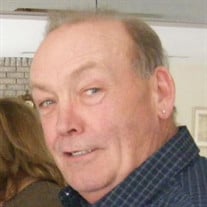 Warren E. Witham, 67, died peacefully on Thursday, October 19th, 2017, in South Amboy, NJ. Services are under the care and direction of Kurzawa Funeral Home, 338 Main Street in South Amboy. Warren was born in Hackensack, NJ on February 10, 1950 to Warren and Mary Witham. He was married to Barbara (Perrone) Witham; Warren served in the US Navy during the Vietnam War before working as a mechanic for the Port Authority for over 20 years. He was loved and adored by many and will be fondly remembered by his wife, son, brothers, sister, nieces, nephews, great nieces, great nephews, and extended family. He is survived by his wife, Barbara A (Perrone) Witham; his son, Christopher M. Witham; his sister Beatrice Frikker and her husband Robert of Holmdel, NJ; his brothers Daniel J Witham and his wife Ellen of Brick, NJ, George D Witham and his wife Linda of South Amboy, NJ; Nieces and Nephews Danielle Greenawalt and her husband Chris, Robert Frikker, Bryan Witham and his wife Sheri, Janelle Acchione and her husband Kory, Paul Witham and his wife Stephanie, Jason Witham and his wife Sophia, Ryan Witham and his wife Kristen; Warren was preceded in death by his parents, Warren and Mary Beatrice (Collis) Witham, and his brother Martin. Services are private, Donations can be made in Warren’s memory to the Disabled Veterans Fund 150 Washington Ave SW, Washington DC 20024, St. Judes Childrens Hospital or to the Autism Speaks Foundation.

The family of Warren E Witham created this Life Tributes page to make it easy to share your memories.

Send flowers to the Witham family.