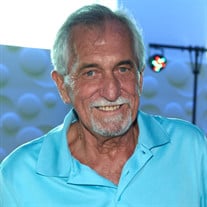 On Thursday, February 11, 2021, Walter J Pankiw 73, passed away. He was predeceased by his parents Jaroslawa and Michael, and his sister Tatiana. He is survived by his loving wife Krystyna, his daughter Linda and her husband Ron, his daughter Melissa and her husband Robert, his granddaughters Maya, Emma, Lily, Ciara, Ariana and Aliya, his grandsons Jaden and Cameron, his brother Igor, and a host of nieces, nephews, cousins, and friends. Walter was born on March 25, 1947, in Heidenau, Germany to Jaroslawa and Michael Pankiw. He was the youngest of 3 siblings, Tatiana and Igor. At young ages, Walter’s parents would soon leave Germany and settle in America in search of a better life for their children. Growing up in America, Walter developed a love of soccer and went on to excel and play for teams such as the Polish Falcons. Walter also possessed an uncanny gift in working with his hands to be able to work on, fix or build anything he put his mind to. He went on to attend Irvington Tech, which would help him sharpen his already gifted skills and talent. In 1965, Walter met the love of his life, his dear Krystyna Kazimierczak. The two married in 1970 and were inseparable. They developed a unique bond and complimented one another effortlessly. They were blessed with two daughters. Walter was a veteran who served during the Vietnam War from 1968-1970, where his skills were used to work on tanks and a variety of army vehicles. He would go on to use his skills to open an automotive repair shop and successfully ran it for a few years. In 1976, he was hired by Clinton Milk as a diesel mechanic. He was so well respected not only for his abilities but for being such a reliable and dependable hard worker. If Walter was handling a job, everyone knew it would be done right, on time, every time. They also knew they could call on Walter for help when they couldn’t figure something out. For these reasons, Walter was one of the few workers that remained after Clinton Milk was purchased by Farmland Dairies, where he would accumulate 38 years of service. By his appearance, Walter was strong and tough and had a sense of humor that may have been a bit brash at times, but he had such a big and caring heart that everyone who had come to know Walter felt. One thing was for sure about Walter: you never had to guess what was on his mind or worry about him beating around the bush. He said it like it was, meant what he said, and said what he meant. Walter’s big heart and passion became evident in many of the things he loved. He loved gardening and seemed to grow everything just perfectly. He loved to do yard work and kept his yard in pristine condition. There was never a blade of grass or edging out of place. He loved to cook and came up with many delicious signature dishes. His unique meatball creation instantly became a family and friend favorite that became known as “Wally Balls.” He had such a love and passion for fishing and being on his boat in the ocean. He had acquired many boats over the years with each one reflecting a unique piece of his personality. When Walter wasn’t fishing, he loved to go to flea markets on the weekends and accumulated more fishing gear and tools that could rival a local tool store. He had any tool or machine you needed. While he would love to loan you anything, he wanted to help fix your problem first, because he loved fixing things and could fix almost anything. He loved cars and trucks, and kept everything in his care in tip-top shape and looking great. Above all, Walter loved to go on vacation with his family. He and Krystyna made sure that for over 30 years their children and then their grandchildren would enjoy soaking up the sun and relaxing by the water in Ocean City Maryland. This became a family tradition and gave the grandchildren priceless memories and something to look forward to each year. Walter was endearingly known by his grandchildren as “Pop-pop.” But to everyone else he was known to be a loving and caring husband, father, brother, and friend. Due to the current pandemic, Walter’s family will have a private service at his home. If circumstances allow, they hope to have a memorial to honor Walter with extended family and friends near the water where he loved to spend so much of his time. In lieu of flowers or gifts, Walter’s family has set up an account that will be used, in part, to honor him in ways that represent his amazing spirit, such as a memorial bench by the sea. If you would like to contribute or donate, please feel free to send to: The Pankiw Family, PO Box 5504, 151 Highway 516, Old Bridge, NJ 08857

On Thursday, February 11, 2021, Walter J Pankiw 73, passed away. He was predeceased by his parents Jaroslawa and Michael, and his sister Tatiana. He is survived by his loving wife Krystyna, his daughter Linda and her husband Ron, his daughter... View Obituary & Service Information

The family of Walter J. Pankiw created this Life Tributes page to make it easy to share your memories.

Send flowers to the Pankiw family.