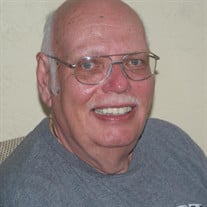 Stephen Michael Grams, 79 entered into eternal rest on Friday, September 17, 2021 at home in Old Bridge, NJ surrounded by his Family. Stephen was born in Brooklyn, NY the son of Stephen and Margaret, he graduated from Eastern District High School. His time as the Master Sergeant of the Civil Air Patrol was one of the proudest memories of those 4 years. Stephen immediately started work at Manufacturers Hanover Trust Company as a Rack Clerk after graduation. He retired 37 years later in 1996 as Vice President of Chase Bank in New York City. Steve was involved in many organizations and volunteered his time whenever possible. He spent many years as the Financial Advisor for the Lieutenants Benevolent Association of the New York City Police Department. The Association made him an honorary member before he stepped down. He also was the President of the Quarter Century Club for Chemical Bank, once he hit the milestone. Steve was an avid bowler and played for Manufacturers Hanover in Madison Square Garden for many years. You could also find him many nights bowling at Hill Lanes in Old Bridge. He also held positions in all of the leagues he played in. Steve made sure he gave back whenever possible including with his church serving as their financial Secretary. Since they were married 60 years many people would ask them what's their secret so my mother would always say "we never had a fight" and my father would say "that I won". Stephen is survived by his loving wife of 60 years, Joan, his children Stephen Michael Grams JR. and his wife Maureen, Leslie Powell and her husband Frank, Stefanie Nizolek and her husband Rich. Cherished grandfather to 10 grandchildren Ryan Powell, Becky Molzon and husband Justin, Thomas Grams and wife Lauren, Brittany Pfeiffer-Hemenway and husband Zach, Matthew Pfeifffer and fiancé Colleen, Stephen Grams, Jordan Powell, Robert Grams and fiancé Samantha, Alexandra Pfeiffer, and Marissa Powell, and five Great Grandchildren. Friends and family are invited to pay their respect at the Kurzawa Funeral Home 338 Main Street, South Amboy, NJ 08879 on Wednesday, September 22, 2021 from 2pm to 4 pm and 7 pm to 9 pm and from 9:30 am on Thursday morning, followed by an 11 am funeral mass at St. Peter's Episcopal Church, Spotswood, NJ. Please visit www.KurzawaFH.com for more information, to send condolences or a tribute.

Stephen Michael Grams, 79 entered into eternal rest on Friday, September 17, 2021 at home in Old Bridge, NJ surrounded by his Family. Stephen was born in Brooklyn, NY the son of Stephen and Margaret, he graduated from Eastern District High... View Obituary & Service Information

The family of Stephen M. Grams created this Life Tributes page to make it easy to share your memories.

Send flowers to the Grams family.