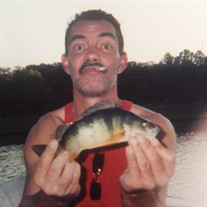 Richard Paul Sweatt Sr., age 60,South Amboy, passed away peacefully on April 4th, 2019 surrounded by his loving family. Rick, fought a courageous battle with cancer the same way he lived his life- with strength, bravery and optimism. Known to most as Rick, a native of South Amboy, New Jersey, who worked as a Truck Driver and Warehouse Worker with Gerber Plumbing Company. Rick was an avid adventurer and outdoors-man who enjoyed fishing and hiking. He partook in marathons for charity and always held a deep appreciation for nature. Rick would describe himself as “An ornery son of a Brooklyn Bridge”; However, he was more known for his charismatic personality that most everyone gravitated towards. He always had the ability to put a smile on anyone's face no matter what they were going through. He is survived by his mother Monica, wife Doreen, children Richard Jr., Michelle, Matt, his wife Melanie, grandchildren Brianna, Carl and Matthew, dear brothers James, his wife Nora, Jas and Alan, sister Lisa and many nieces and nephews. He is predeceased by his father Cam Sr., brothers Cam Jr., Timothy and sister Cynthia. Rick is joined in heaven with a precious little girl his granddaughter Shyla. Rick was a dedicated and loving son, father, husband and friend to all that knew him. Rick leaves a legacy of love and much laughter. His love for his family, his sense of humor and mischievous smile will be remembered by all who loved him. We will miss him dearly. Friends are invited to pay their respects to the family on Monday, April 8, 2019 from 5 to 7pm with a prayer service at 6:30pm at the Kurzawa Funeral Home. Cremation private.

The family of Richard "Rick" Sweatt Sr. created this Life Tributes page to make it easy to share your memories.

Send flowers to the Sweatt family.