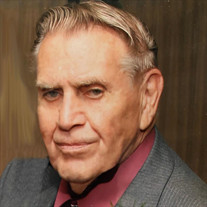 Michael J. Daley Jr., of the Parlin section of Sayreville, left the world peacefully at home Friday, surrounded by his loved ones. He was 95 years old. Michael was born in Pittston, PA on August 13, 1925 to Mary (O’Malley) and Michael J. Daley Sr. He was a graduate of Pittston High School. In 1945, he moved to Newark, NJ where he met the love of his life, Barbara Glossenger. They were married in 1950 and recently celebrated their 70th wedding anniversary. Their devotion to one another was an inspiration to all who have known them. Michael was employed with Western Electric for over 40 years. However, throughout his life, he wore many hats. Michael was a real estate broker for over 20 years, many of them with J.J. Harrigan of Parlin. His entrepreneurial spirit also led him to open his own deli in Jackson, NJ. Following his retirement, Mr. Daley drove for Middlesex County’s Area Wide Transportation Service for 10 years—enjoying the company of his senior citizen neighbors. When he wasn’t in his beautiful garden, “Big Mike'' was besting his grandkids in billiards, adding to his meticulous coin collection, taking trips to Atlantic City with his best gal and fulfilling his “honey-do” list that was always so lovingly hanging on the fridge. He gave his time to the Cub Scouts, was a lifelong member of the Elks and a devout supporter of the MS Society, the Wounded Warriors and St. Jude’s. He was charismatic, kind and thoughtful—a friend to all who knew him. Michael is predeceased by his son Donald Daley, his siblings Bill Daley, Al Daley, Grace Salange, Dolores Daley and Charlotte Cleary. Left to cherish his memory is his loving wife, Barbara; his two sons Michael J. Daley III, of Waymart, PA and his wife Katharine, and Joseph Daley of Parlin and his wife Robin. Michael’s legacy lives on in his two grandchildren, Kim Daley of Edgewater and Joseph Daley of Parlin; and his 4 great-grandchildren, Nathan, Liam, Quinn and Brendan. A private service was held for immediate family on Tuesday with internment at Holy Cross in Jamesburg, where he now rests in peace next to his beloved son, Donald. If friends and family would like to honor Michael’s memory, Mrs. Daley asks that monetary or clothing donations be made to the Salvation Army.

Michael J. Daley Jr., of the Parlin section of Sayreville, left the world peacefully at home Friday, surrounded by his loved ones. He was 95 years old. Michael was born in Pittston, PA on August 13, 1925 to Mary (O&#8217;Malley) and Michael... View Obituary & Service Information

The family of Michael J. Daley Jr. created this Life Tributes page to make it easy to share your memories.

Send flowers to the Daley family.