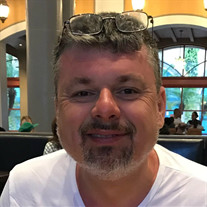 Mariusz J Maslanka 48, of Parlin, NJ passed away on Saturday, November 27, 2021. Mariusz was born in Rzeszów, Poland on September 5th, 1973 the son of Andrzej Maslanka and Zofia Maslanka. From the age of 10, he began following his passion for craftsmanship after inheriting the same dedication from his father. He learned the true meaning of family, trust, and friendship through his six siblings; Beata, Tomek, Marzena, Łukasz, Jolanta, and Barbara. Mariusz met the love of his life, Aneta Adamczyk and ever since he first laid eyes on her, he knew he would take all the risks in the world to defend their love. This included escaping from the Polish Army to attend their own wedding. The union of their love is what truly began Mariusz’s journey. Mariusz 'plan to bring a comfortable life to his wife and newborn son, Adrian, began in 1999. He was a master of all trades but his true skills and love for electrical work led him to Union Local 164, and S&J Electrical where he poured his blood, sweat, and tears into his line of work. This devotion surrounded him with people whom he considered to be his family. His life was built upon three foundations: hard work, respect, and finding humor in everyday life. Mariusz was diligent in everything he worked on. He was driven by his vision of providing a gratified life for his family. Generosity combined with his rule of mutual respect is what sustained so many friendships in Mariusz’s life, not to mention his ability to make someone laugh to the point of tears. He was a role model to not only his peers, but his son Adrian, who continuously strives to resemble the man his father was. Mariusz learned to be gentle and sweet-tempered for his little girl Sabrina. His adoration for her was undeniable and he will always be her hero. Mariusz was a remarkable man who will be celebrated for generations. Mariusz is survived by his devoted wife Aneta Adamczyk-Maslanka, his beloved son Adrian Maslanka, his precious daughter Sabrina Maslanka and by all the family and friends that Mariusz has touched the hearts of. Friends are invited to pay their respects to the family on Friday, December 3, 2021 from 6pm to 8 pm at the Kurzawa Funeral Home, 338 Main Street, South Amboy, NJ 08879. A 10am funeral mass will be offered at Sacred Heart Church, 531 Washington Avenue, South Amboy, NJ 08879 on Saturday followed by a service at Rosehill Crematory, 792 E. Edgar Road, Linden, NJ 07036.

Mariusz J Maslanka 48, of Parlin, NJ passed away on Saturday, November 27, 2021. Mariusz was born in Rzeszów, Poland on September 5th, 1973 the son of Andrzej Maslanka and Zofia Maslanka. From the age of 10, he began following his passion... View Obituary & Service Information

The family of Mariusz J. Maslanka created this Life Tributes page to make it easy to share your memories.

Mariusz J Maslanka 48, of Parlin, NJ passed away on Saturday,...

Send flowers to the Maslanka family.