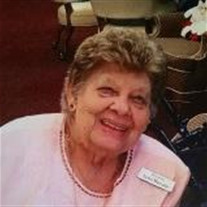 Lydia M. Marcano, 86, of Oviedo, FL, decided it was time to dance, sing, and play baseball again on Monday, February 20, 2017, in Winter Park, FL with her family by her side when she passed. The viewing hours at Kurzawa Funeral Home, 338 Main St. in South Amboy, NJ are Friday, March 3rd from 5 to 8 PM, and Saturday, March 4th from 8 AM to 9:30 AM. A Funeral Mass will be celebrated on Saturday, March 4 at 10 a.m. at St. Mary’s Roman Catholic Church in South Amboy. Interment will follow at Christ Church Cemetery in South Amboy. Lydia was born in Santo Domingo, Dominican Republic, where she made lasting memories of sliding into third base as a young girl! She later moved to New York City, where she rode the trains, learned English, and met the great love of her life, Robbie. The couple moved their cherished family to South Amboy in 1965; where she raised generations of children. She fondly recalled working at Perth Amboy General Hospital when her two eldest granddaughters were born. She was in the delivery room, coaching on standby. Lydia was a giving woman devoting much of her time to St. Mary’s Church of South Amboy, often slipping her favorite sports teams into the weekly prayers. Never, was there a greater fan of her beloved Yankees and Giants than Lydia. She could put any commentator to shame, constantly up to date with the latest sports stats! She was also a big fan of Broadway shows and could sing a line, loudly and proudly, from every show ever performed on Broadway; she would also be the first to tell you that God didn't give her a voice to sing. After moving to Florida, Lydia quickly became the Bingo Queen and enjoyed yoga and knitting with her friends. Lydia lived her life without fear and was always ready to take on the world at a moment’s notice! On February 20, 2017, she decided it was time to meet up with her beloved husband, Robert Marcano, her beloved parents, one of her two best friends, her sister, Swinda Ruiz, brother Tomas Pastor and his wife Adela, so they could go dancing and partying for eternity. Lydia is survived by family and friends across the world, including her best friend, partner in crime, and sister Cristina Dopico, daughter and her husband, Margaret and Dan Fogel, son and his wife, Robert and Yolane Marcano, son, daughter-in-law and grandchildren, Thomas, Betsey, Margo, Anna, and Madison Marcano, nephew, Roland Ruiz, his son Roland (R.J.) Ruiz, Jr., and Roland’s partner Anna Marie Alford, nephew and his wife, Joseph and Kellie Dopico, their children Chloe and Dillan Dopico, niece Annie Dopico, her children Taylor Nummi, Andres Nummi, and Monty Nummi, granddaughter Kristine Tucker and her partner Joseph Coughlan, granddaughter and her husband, and great-grandchildren, Jennifer Tucker-Gieb, Adam Gieb, Andrew and Cassandra McDermott, and many, many more. Lydia was a force of nature who had a passion for life in the very center in her soul that will live on forever in the hearts of those who loved her. The way she lived and loved remains an inspiration to all who were lucky enough to know her. Her courage will never be forgotten and will endure for all time as a source of strength for her family, friends, and – God Willing – Sports teams!

Lydia M. Marcano, 86, of Oviedo, FL, decided it was time to dance, sing, and play baseball again on Monday, February 20, 2017, in Winter Park, FL with her family by her side when she passed. The viewing hours at Kurzawa Funeral Home, 338 Main... View Obituary & Service Information

The family of Lydia M Marcano created this Life Tributes page to make it easy to share your memories.

Send flowers to the Marcano family.