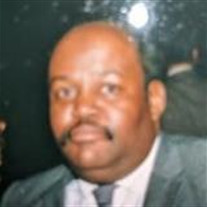 Levi Ellerbe, Jr, of Newark New Jersey passed away on September 28, 2017 at St Michaels Medical Center. Visitation and Memorial Services will be held October 3, 2017 at The Chapels at Short Hills, 451 Millburn Ave, Millburn, NJ. 07041 beginning at 11am. Arrangements are being handled by Kurzawa Funeral Home. Levi was born in Newark, New Jersey on July 22, 1950. He graduated from Central High School and received a football scholarship to NJIT formerly known as NCE (Newark College of Engineering). He met the love of his life, Gladys McIntyre, in the late seventies whom he married on July 21st in the early eighties. After leaving Monsanto Company, Levi worked as a splicer/technician at Verizon and retired from the company September 2010. In addition to watching all sports, going camping, bowling and playing card with his buddies, Levi loved to travel with his wife and friends especially summer cruises and an annual week spent in Atlantic City. Levi is survived by his wife Gladys McIntyre, three daughters; Ginger Heath, Gina Carter and Alana McIntyre-Nathari, a sister Glenda Ellerbe-Jones, seven grandchildren; DaBrel Heath, Elijah Anderson, Alysse Anderson, Levi Morgan, Roman Richardson, Aliea Richardson and Mia Morgan, a nephew, Mark Ellerbe and a host of other family and friends. Levi is preceded in death by his parents, Levi Ellerbe and Ruth Ellerbe, as well as his brother, Richard Ellerbe. The family of Levi Ellerbe wishes to thank all who helped us through this difficult time.

The family of Levi Ellerbe, Jr. created this Life Tributes page to make it easy to share your memories.

Send flowers to the Jr. family.