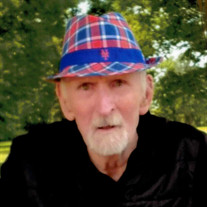 James J. Carney, Jr. 89 of Parlin entered into eternal rest on Wednesday, September 25, 2019 at his home peacefully. James was born in Bayonne the son of James, Sr. and Gertrude, he graduated from Bayonne High School in 1948. He played stick-ball and tackle football in the streets of Bayonne. He marched with Saint Vincent’s Drum and Bugle Corp, while hanging out in Jooches Candy Store. He played softball in the city leagues and basketball in the CYO. James served his country proudly in the United States Air Force, he had married the love of his life, Ellie, after returning from Germany and shortly thereafter moved to Parlin where he has lived since 1960. In 1963, James went to New York to conquer show business and found out that it was harder than playing stick ball or pinochle. Being very artistic James created much to be remembered by, he has written jokes for comedians, performed his own stand-up comedy act, wrote stage plays, movies and television scripts, a musical comedy, cartoons, poems, short stories and published a few books. James was also a self employed contractor who owned and operated Carney’s Aluminum for over 30 years, specializing in roofing and siding. When James retired he then started driving a school bus part time for children with disabilities. He was a member of the Knights of Columbus Council #426 of South Amboy and was a Past Grand Knight. James is survived by his children Jay Carney, and his wife Selma, Sean Carney, and his wife Nayna, Douglas Carney, and his wife Jennifer, Erin Carney, and her husband Paul Dennis and Vanessa Carney. He was the cherished grandfather to Ashley Connors, Katie Hasselbrink, and her husband Kyle, Daniel Carney, Meghan Carney, Kyleigh Carney, Keith Carney, Steven Carney, Amanda Carney, George Dennis, Elizabeth Dennis, Paul Dennis and one great-grandchild Brady Hasselbrink. Also survived by his dear sister Mary Ellen Carney. Predeceased James was his parents James J. Sr. and Gertrude Curtis, his wife Eleanore, brothers Owen Carney, Christopher Carney, sister Gertrude Walker. Friends are invited to pay their respects to the family on Friday, September 27, 2019 at the Kurzawa Funeral Home, 338 Main Street, South Amboy, NJ 08879 from 4pm to 7pm, followed by a 10am funeral mass on Saturday morning at St. Bernadette's Church, Parlin, NJ 08859. In lieu of flowers please make donations to Menlo Park Veterans Memorial Home, 132 Evergreen Road, Edison, NJ 08837 in loving memory of James J. Carney, Jr.

James J. Carney, Jr. 89 of Parlin entered into eternal rest on Wednesday, September 25, 2019 at his home peacefully. James was born in Bayonne the son of James, Sr. and Gertrude, he graduated from Bayonne High School in 1948. He played stick-ball... View Obituary & Service Information

The family of James Joseph Carney Jr. created this Life Tributes page to make it easy to share your memories.

Send flowers to the Carney family.