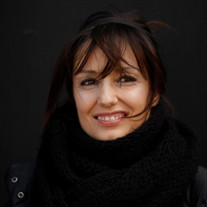 Ivana Radoicic, 43 (Nee: Kalea), of Millburn, NJ had passed away on Monday, June 13, 2022 after a valiant fight with cancer and leptomeningeal disease. She was a true hero in how she endured, struggled and coped with her illness for over six years. Ivana was born and raised in Sarajevo, Bosnia and Herzegovina. After surviving the Siege of Sarajevo for three years, she left for Germany, before moving to Harrisburg, PA, in 1998, as a refugee with her family. She studied mathematics for two years at HACC, Central Pennsylvania's Community College, before securing a transfer scholarship to Wellesley College, where she graduated with B.A. in mathematics and computer science in 2004. While a student at Wellesley, she met the love of her life, her husband, Rados Radoicic, who came from her hometown and was a PhD in mathematics student at MIT at the time. They were smitten with each other from the first time their eyes met on that Valentine’s Day in 2003. They soon moved to New York, where Ivana received her Masters in Mathematical Finance from NYU, Courant Institute of Mathematical Sciences, in 2006. She then joined Bank of America, where she worked in the New York office with her wonderful and supportive colleagues for over fifteen years, most recently as a Director in Counterparty Portfolio Management, before taking long-term disability leave in March of 2020. She was a valued member of the Bank of America Global Markets Risk team and it is no exaggeration to say that we have all benefited from her hard work and generosity. While Ivana was the most remarkable friend you could ask for, gentle and considerate, selfless and reliable, witty while clever, none of that compared to her endless love and devotion to her two young daughters, eleven year old Tara and seven year old Masha. Though her time with them was inexplicably short, the love she showed them each day will last throughout their lives. She fought for them to her last breath. At the young age of 43, Ivana leaves behind her devoted and grieving parents Davorin and Bojana Kalea, her younger brother Slaven Kalea and wife Jenya, and younger sister Anna Kalea. She also left behind her mother-in-law, Milena, who adored her; and Rados’ brother Milos and partner Gerhard Spangenberg. Tara’s and Masha’s godparents Greg and Zlata Gleason with their families will forever feel her absence. We would like to thank the oncologist teams at the Perlmutter Cancer Center at NYU Langone and the Dana-Farber Cancer Institute for prolonging Ivana’s life so that she could spend precious time and create more wonderful memories with all of us. We would also like to thank all her wonderful friends, colleagues, and relatives for their prayers, support, encouragement, and memories. It is very much appreciated. A Funeral Services will be held on Friday, June 17 at 11am to 12pm, at The Chapel at Short Hills Mausoleum, 451 Millburn Avenue, Millburn, NJ 07041. In lieu of flowers, we are asking you to contribute any photos, memories and/or funds for our daughters' comfort and education at https://www.ivanaradoicic.com/ .Thank you in advance for your generosity!

Ivana Radoicic, 43 (Nee: Kalea), of Millburn, NJ had passed away on Monday, June 13, 2022 after a valiant fight with cancer and leptomeningeal disease. She was a true hero in how she endured, struggled and coped with her illness for over six... View Obituary & Service Information

The family of Ivana Radoicic created this Life Tributes page to make it easy to share your memories.

Send flowers to the Radoicic family.