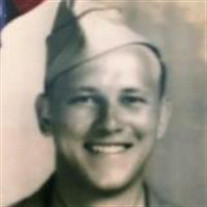 Irving J. Stern died peacefully on Sunday, April 9th, 2017, at Monroe Village, NJ. He was 97. Irv and his twin Sylvia were born on February 26, 1920 in NYC to Louis and Ella (Mark) Stern, joining sisters Ruth and Victoria. He attended Brooklyn College and served in the US Army during WWII. Tennis and classical music were lifelong passions. Irv married the love of his life, Laura Robinson, had two children, and raised them in Valley Stream, NY. They retired to Kings Point in Delray Beach, FL. He volunteered at the Morikami Museum, served on the boards of the tennis club, condominium and Capri G, captained the tennis team and helped run the county league. Summers were spent in NY & NJ near family. In 2011, they moved to Monroe Village. In addition to his parents, Irv was predeceased by an uncle, an aunt, a cousin, his three sisters, and a nephew. His survivors include: his beloved wife of 73 years, Laura, his daughter and son-in-law, Miriam and Bill Sharick of Stamford; his son and daughter-in-law, Danny and Jill (Burstein) Stern of Princeton; grandchildren Michael and Laura Sharick, Sara Sharick, Abby Stern and Marc Stern; great-grandchildren Benoit and Pascale Sharick; and several nephews and their families. His ashes will be interred at Pinelawn Memorial Gardens on Long Island. Anyone wishing to honor his memory may make a contribution to Friends of Music of Stamford, Inc., PO Box 295, Stamford NY 12167.

The family of Irving J. Stern created this Life Tributes page to make it easy to share your memories.

Send flowers to the Stern family.