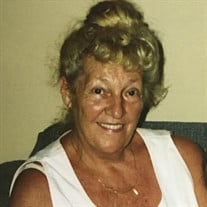 Ingeborg Sofia Boscia 93 (Nee: Kessler) of Old Bridge entered into eternal rest on Tuesday, April 2, 2019. Those who expressed surprise at how she was able to keep going, underestimated her capacity for stubbornness, resilience, and strength. Just before she passed she told me, her only daughter, “I love you 1000 percent, we had a beautiful life together.” Inge was a remarkable woman, she was an only child, born in Mannheim, Germany during WWII, her parents main concern was their young child's safety. Inge was sent to reside with her relatives nestled in a safer haven than the city of bombings. While walking across the open field to the safety of the countryside, she escaped the fire of an enemy plane by jumping in a ditch. During her young life she survived the bombing of her elementary school while she was in class, and narrowly escaped the bombing of her apartment building by mere minutes. Inge was extremely frugal, growing up during a war where one needs a ration ticket to get a meal, she learned to waste nothing. Before Inge fell ill she was a passionate gardener, while growing up I enjoyed it by her side and we continued to do so together throughout our lives. She was a fabulous cook, baker, a creative person who enjoyed many different crafts, and kept a spotless house. She would tell me if I always put something back where I found it I would never lose it. She married her husband, Louis G. Boscia,a WWII Sergeant on September 27, 1947 at St. Rocco’s Church in Newark, NJ. They met in Germany, Louis spotted her swimming in the Rhine River, Inge loved to swim. He brought her to the United States at 18 years of age where she became a citizen of the USA. Inge was preceded in death 38 years ago, by her beloved husband Louis and her son, Henry who tragically died in a car accident on his return home from college. Her parents Henry and Sofia Kessler, and her beloved son-in-law Robert P. White. She is survived by her loving daughter, Marianna White, her son, Joseph L. Boscia, her adored granddaughters Julie Koziel, her husband Ron, and Callie White, and cherished great-granddaughter Riley Rose Koziel. Friends are invited to pay their respects to the family on Friday, April 5, 2019 from 10am to 12pm, with a catholic prayer service at 11:30am at the Kurzawa Funeral Home, 338 Main Street, South Amboy, NJ. Burial will take place at St. Joseph’s Cemetery Keyport.

Ingeborg Sofia Boscia 93 (Nee: Kessler) of Old Bridge entered into eternal rest on Tuesday, April 2, 2019. Those who expressed surprise at how she was able to keep going, underestimated her capacity for stubbornness, resilience, and strength.... View Obituary & Service Information

The family of Ingeborg Sofia Boscia created this Life Tributes page to make it easy to share your memories.

Send flowers to the Boscia family.