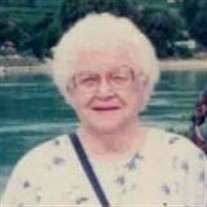 Doris Ruszczyk, 90, of South Amboy died peacefully on March 30, 2017, with her family by her side. Born and raised in South Amboy, the daughter of the late Frank and Bertha Kazmierski Wilczek, Doris was a proud graduate of St. Mary’s High School, Class of 1943. She was an executive secretary at National Lead in Sayreville and at Perth Amboy Savings Institution (Bankers Savings) prior to her retirement. Doris was a parishioner of Sacred Heart R.C. Church in South Amboy where she was a member of the Sacred Heart Senior Citizens Club. She was a charter member of South Amboy #426 Columbiettes. A world traveler, Doris loved visiting London, Austria, and Italy and last summer had a memorable Oceania cruise to the D-Day beaches in Normandy and to the chocolate shops in Belgium. Her most cherished travel moment was a Papal Audience with Saint Pope John Paul II in Rome. Although she loved to bake, Doris was better known for her love of cake, cookies, candy and sweets. Among her favorites were the cannoli in Taormina, Sicily and the Sacher Torte found in Austria. She loved going to Atlantic City, Christmas shopping in New York City, and watching The Sound of Music, South Pacific, Oklahoma, and Andre Rieu musicals on television. She was predeceased by her husband of 55 years Walter Ruszczyk who died in October 2004. She is survived by her daughter and son-in- law, Cheryl and Stephen Schmid, her sister-in- laws Frances Maciejowski and Ann Ruszczyk, along with many nieces, nephews, and cousins. Funeral services will be held on Tuesday April 4, at 8:30 am at Kurzawa Funeral Home, 338 Main Street, South Amboy, followed by a 9 am Mass of Christian Burial at Sacred Heart R.C. Church. Burial will be at Sacred Heart Cemetery. Visiting will be a 2 p.m.to 4 p.m. and 7 p.m. to 9 p.m. at the funeral parlor on Monday, April 3. In lieu of flowers, the family would like donations to be to Sacred Heart Church, South Amboy.

Doris Ruszczyk, 90, of South Amboy died peacefully on March 30, 2017, with her family by her side. Born and raised in South Amboy, the daughter of the late Frank and Bertha Kazmierski Wilczek, Doris was a proud graduate of St. Mary&#8217;s High... View Obituary & Service Information

The family of Doris Ruszczyk created this Life Tributes page to make it easy to share your memories.

Send flowers to the Ruszczyk family.