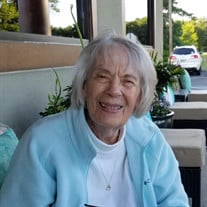 Carol Miglin (Nee:Dixon) of Parlin, passed away peacefully on January 4, 2021 one day after her 88th birthday. Carol was born the daughter of Thomas and Lilly, she grew up in the rural area of southern Ohio and graduated from the University of Dayton. She met her husband Frank when he was stationed at Wright Patterson Airforce Base and moved to South Amboy, New Jersey after their wedding. For 20 years Carol had a career teaching high school Chemistry and Physics in the Old Bridge School System. During that time she earned her doctorate degree in computer education. After the death of her husband in 1992, she continued to teach until her retirement in the mid 90’s. Carol is now joined in heaven with her parents Thomas and Lilly Dixon, husband Frank Miglin, her siblings Phyllis DeMass, Tom Dixon and Jim Dixon Carol is survived and missed by her children Kris Bednarz married to Brian, Teri May married to Alan, Michael married to Ellen, and Tom engaged to Millie. She will also be greatly missed by her grandchildren Kaelon, David, Taylor, Lindsay, Jessie, Matthew, Christopher, Emily, Timothy, Avery, Marek, and Payson as well as her great grandchildren Luca, Hamilton, Sawyer, and Mac. She cherished each of her children, grandchildren, and great grandchildren. Spending time with them was one of the great joys of her life. Friends are invited to the Kurzawa Funeral Home, 338 Main Street, South Amboy, NJ 08879 on Thursday, January 7, 2021 between 3pm and 5pm. A 10 am funeral mass will be held at Sacred Heart Church, South Amboy on Friday, January 8, 2021. Due to current circumstances and guidelines there will be limited occupancy during the viewing time, masks are required as well as social distancing practice while paying your respects. In lieu of flowers, please consider making a donation to St. Jude’s Hospital – a charity that was near and dear to Carol’s heart.

Carol Miglin (Nee:Dixon) of Parlin, passed away peacefully on January 4, 2021 one day after her 88th birthday. Carol was born the daughter of Thomas and Lilly, she grew up in the rural area of southern Ohio and graduated from the University... View Obituary & Service Information

The family of Carol Rae Miglin created this Life Tributes page to make it easy to share your memories.

Carol Miglin (Nee:Dixon) of Parlin, passed away peacefully on...

Send flowers to the Miglin family.