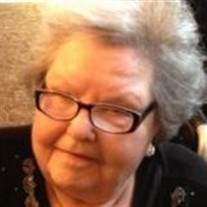 Ann Theresa (Fitzsimmons) Domino, 81, of Sayreville, entered peacefully into everlasting life on Saturday, December 17th 2016 with family by her side. Arrangements are under the care and direction of Kurzawa Funeral Home, 338 Main Street in South Amboy. Funeral services will begin on Wednesday, December 21, 2016 at 8:30 a.m. in the funeral home followed by a Mass of Christian Burial at Sacred Heart Church located at 531 Washington Ave, South Amboy at 9 a.m. Interment will follow at Woodbridge Memorial Gardens in Woodbridge. Visiting hours will take place at the funeral home on Tuesday, December 20th 2016 from 5 to 9 p.m. Memories and condolences may be shared at www.kurzawafh.com Born and raised in Newark, NJ to the late Leo and Kathleen (Coogan) Fitzsimmons, Mrs. Domino has been a resident of Sayreville for over 50 years. She worked over 40 years of service with NJ Bell, Bell Atlantic, AT&T and Verizon as Telecommunications Engineering Dispatcher prior to her retirement in 1993. She was also a proud homemaker, devoted to her family. Beloved wife of 58 years to Robert Domino. Devoted mother to Ann Marie Clemente and her husband Troy, John and his wife Lisa, James and his wife JoAnn and Robert Domino. Cherished grandmother to Kyle and Brianna Clemente, John “JD” Domino, Courteney Willburn, Kaitlin and James Domino, Jennifer Mackey, Ryan and Matthew Domino and 2 great-grandchildren Charlotte and Chase Mackey. Dear sister to Ceal Cetnar and Mary Ellen Pompilio and many loving nieces, nephews, cousins and dear friends. In lieu of flowers, donations may be made in her memory to: Michael J. Fox Foundation for Parkinson’s Research www.michaeljfox.org

Ann Theresa (Fitzsimmons) Domino, 81, of Sayreville, entered peacefully into everlasting life on Saturday, December 17th 2016 with family by her side. Arrangements are under the care and direction of Kurzawa Funeral Home, 338 Main Street in... View Obituary & Service Information

The family of Ann Theresa (Fitzsimmons) Domino created this Life Tributes page to make it easy to share your memories.